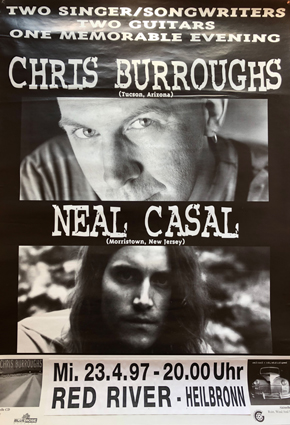 In 1997 NEAL CASAL toured Germany for the first time, together with CHRIS BURROUGHS from Tucson, Arizona, organized by their European labels Glitterhouse Records and Blue Rose Records. Both musicians performed solo shows which brought them from April 11 through May 12 also to Austria, Switzerland, Italy, and the Netherlands. On April 23 they played the „Red River Saloon“ in Heilbronn. Both did a 70 minute set which was recorded but never made available to the public in any way. In remembrance of NEAL CASAL who has passed away on August 26, and CHRIS BURROUGHS who died on November 19, 2018, the entire sets will be broadcast on German internet radio station rockradio.de on Friday, August 30, starting at 7pm CEST. A live chat is installed and it would be great if listeners would tell their personal stories with Neal and Chris.