This record was written mostly in the summer of 2016 in my apartment off of Trinity Lane. A few tunes came out on the road as well. After moving out of an ex's house, I settled into a new neighborhood down the road. Shortly after, I picked up a tour with my good friend John Moreland where we went to the West Coast and back. I was trailing them in my little 2002 Honda Accord that has literally been all over the country with me. A woman in my early 30s, I found myself sick of my same old shit. I was inspired by the landscape of the west. My faith was tested on the curves of the Highway 101 through the Red Woods. I got terrifyingly stoned on weed gummy bears in Denver. I saw real cowboys in Wyoming and drove through a flood in Arkansas. I felt displaced, but connected. Upon returning to the south, my home of Tennessee, I slunk back into my nook off of Trinity. I went over all the things I'd seen. There had been a freedom in being so far away - a lack of responsibility, a distance from some of the issues, if you will, though I'd carried them right with me, back to my birthplace of Los Angeles, peering over the ocean, wondering how you can come so far yet end up in the same place. I contemplated fleeing and just staying in California, but the south is my home and I had to deal with what needed to be dealt with. I started to write. And go to the park. And listen to records. And play my guitar every night. Every time I wanted a man, I picked up my guitar. Every time I wanted a drink, I picked up my guitar. Love will take you to the darkest places but also to the most honest places if you let it. Learning how to love myself is something I've always been lousy with, and I spent some time on that. I thought about my sobriety, what that means to me, the struggles I'd had throughout the years, since I was a 27-year-old and hung up my toxic drinking habit. I thought about my mother, who took her own life when I was a baby, not far from my age at 30 years old, and I related to her more than ever. As you can see, there was plenty of time spent on my own. I didn't talk to that many folks, albeit a few close friends, and leaned into my family. I stayed away from men, and danced alone in the evenings, looking out my window observing my humble and lively neighborhood. I found power in being by myself. I found peace in the people I was surrounded with - we didn't really know one another, but we smiled when passed on the street. One time I almost rear-ended an older woman in her car backing out of my driveway and I said, "Oh man, I'm just not used to any cars coming around this bend." She replied, "This is our little hideout, baby." And it really was. The woods were behind me, Dickerson Pike was in the front. So after a while, I had all these songs to play, and wanted to share them. I wanted to get out of town to get some distance from everything, so after an ongoing conversation with Michael Trent, I took my band to Johns Island, SC and we holed up for a few weeks. I poured my heart out, and trusted them with it, and these guys gave it right back. I think we all understood what it's like to question home, intention, demons, love... I think most people understand that. I hope you love this record, I made it for you. 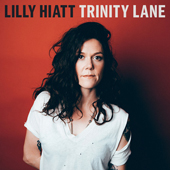 1 All Kinds of People
2 The Night David Bowie Died
3 Trinity Lane
4 Everything I Had
5 I Wanna Go Home
6 Imposter
7 Records
8 Different, I Guess
9 Rotterdam
10 Sucker
11 So Much You Don't Know
12 See Ya Later