Greetings From The Neon Frontier

2018 release. The Wild Feathers return with Greetings From the Neon Frontier, which finds the band embracing their more countrified influences, while retaining the heavy harmonies, gritty guitar playing, and smart, tight songwriting that brought them to prominence. The album reunites The Wild Feathers with award-winning producer Jay Joyce, who oversaw the group's self-titled debut and their sophomore album Lonely Is a Lifetime. The Wild Feathers are an American country rock band formed in 2010 in Nashville, Tennessee. The band's debut was released the summer of 2013. The self-titled album charted atop the Billboard's Heatseekers chart, and at #109 on the Billboard 200, resulting in invites to appear on various television programs, as well as acclaim from major music publications. The band's sophomore studio album, Lonely Is a Lifetime, was released March 11, 2016. 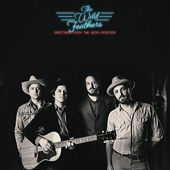