Returns To Valley Of Rain

Valley of Rain was Tucson’s Giant Sand’s debut album recorded in 1983, and eventually released by 1985. It included Howe Gelb on vocals, guitar and Winston Watson on drums for most of it, Tommy Larkins on drums for some of it and Scott Garber on fretless bass for all of it.

Now some 30 years later, This new re-recording of that first album will be toured by the band this summer, playing only those Valley of Rain songs. 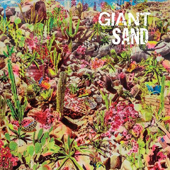