The Unfortunate Demise Of Marlowe Billings

Perhaps how one leaves a party is more important than one's entrance. Green on Red's Dan Stuart has chosen to make his final full length record - 'The Unfortunate Demise Of Marlowe Billings' - with producer/guitarist Danny Amis, a founder of Los Straitjackets and former member of The Raybeats. They were both living in Mexico City and have individually worked previously with Twin Tones and Sonido Gallo Negro's leader Gabriel López at T-Vox Recording. The vinyl LP is a companion piece to a novel by the same name, and the two will be released together, along with a CD with six extra tracks and a four CD audio version of the novel. Both works are a sort of noir travelogue through foreign landscapes real and imagined, sublime and horrific, and question whether love can survive in a world of violence and betrayal. The record features players from Mexico, Italy, New York & San Francisco, while the novel bounces between Oaxaca, NYC and CDMX. Stuart's alter ego Marlowe Billings is our musical and fictional tour guide, indeed one could listen while reading and double the pleasure. 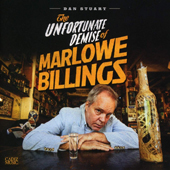