The Chris Robinson Brotherhood is indisputably one of the hardest working bands in rock 'n' roll. 2018 marks the fourth year in a row that they'll play over 200 shows across the U.S. and Europe. Available as a vinyl exclusive, 3-LP set with only 3500 copies released, the collection finds The CRB in peak form delivering highlights like "New Cannonball Rag," "Forever As The Moon" and "Shadow Cosmos," as well as adapting two from The Rolling Stones: "Down Home Girl" and "Let It Bleed" and the seldom played fan favorite, Steppenwolf's "Magic Carpet Ride." If the past is any indication, this will sell out fast, while quickly becoming much sought-after, so fans are advised to grab one quick. 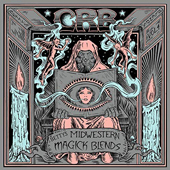