Simple Case Of The Blues

Since her early days on the seminal SoCal country scene at the historic Palomino Club, Rosie Flores has covered a lot of musical ground. Over the course of four decades, she got knee deep in punk, before shifting to alt-country, rockabilly and beyond. Along the way she made history as the first Latino woman to chart in Country Music and joined the ranks of all-time top female guitarists, with features in Guitar Player, Guitar World and Prier Guitar magazines. Simple Case of the Blues brings Flores back to her earliest inspiration - the blues. Co-produced by Charlie Sexton and recorded in Nashville, Flores has never sounded more soulful. 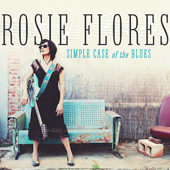