Randy Rogers is the master of making songs that immediately sit well in your heart and soul, and are hard to shake. It’s not just the melody construction, it’s the stimulation of memory with relatable moments that make a Randy Rogers Band song so easy to warm up to, and so hard to not hum along with. Randy Rogers songs come hard wired to be played in front of a big crowd with everyone lost in the moment and singing along. Saturday nights were made for the Randy Rogers Band, and the Randy Rogers Band was made for Saturday nights.
Yes, the songs of the Randy Rogers Band are more practical than poetic as a whole compared to country music’s critical favorites. Randy Rogers is not going to make a short list of this generation’s most naturally gifted singers, and any twang is balanced out by rock tones. But the music resonates with fans both young and old, and in the regular circuit the Randy Rogers Band plays, the band is just as big as many of the bands of the mainstream, while their fan base expands out across the United States in increasingly large pockets as listeners look for something better than what the mainstream is serving. There probably will be better records in 2019 when judged across the musical gradients critics like to harp on, but it will be hard to find another that’s as easily enjoyable to listen to cover to cover. 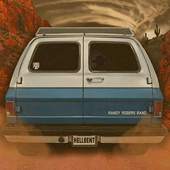