Servants Of The Sun

The CRB's sixth full-length recording since forming in 2011 finds the band setting aside the studio explo-rations of more recent work, instead coming full circle to deliver their most direct, bare bones, rock n' roll offering since debut companion albums 'Big Moon Ritual' and 'The Magic Door.'
Bottling the CRB's pure essence into 10 new songs, 'Servants of the Sun' bursts into the clear blue air with the funky upper atmosphere bubbling of vintage keyboards, sky-climbing guitar lines, driving rhythm and the voice of one of rock and roll's great singers. A gateway swings wide open to a universe that the Chris Robinson Brotherhood has been tirelessly constructing for eight years through extraordi-nary musicianship, epic touring and a roving, seemingly bottomless wizard's chest of sonic delights.
The major themes of 'Servants of the Sun' are experienced in a constant swirl within the CRB sound. There's the up-tempo ramble and strut of "Comin' Round the Mountain" juxtaposed against the surreal on "Venus In Chrome." There's redemption through love on "The Chauffeur's Daughter" set alongside the ominous poetry of "A Smiling Epitaph." "Dice Game" is an exquisite slice of blue country, while "Let it Fall" sashays with fond homage to the slinky rhythms and stoned, but sizzling energy of Little Feat and New Orleans soul-funk. The album captures Robinson and company hurtling between the fire and ma-nia of Saturday night and the bruises and rain-on-the-bus-window reflection of the cold Sunday morning dawn. Beyond the bullet holes, red-eyed angry angels, alchemy, praying mantises, hangovers, and all other manner of cosmic debris gone lyrically airbornelove is lost, new love is found, relationships are bent and broken by distance and time or by unrelenting proximity and timelessness. All the while, the line between autobiography and psychedelic fantasy is completely blurred.
It is to the credit of the Chris Robinson Brotherhood's musical naturalism that such a ferris wheel of themes, tones and characters can exist in the same fast moving air. With 'Servants of the Sun' they've conjured yet another authentic statement free-flowing from their essential expression. In the effortless stream of storylines, hornet-stung emotions, and Kodachrome snapshot images rushing by, the listener hasn't just landed in the CRB's world and the joys and sorrows of their lives, they've also awakened in their dream. And as Chris Robinson sings, "sometimes a dream is to be believed." 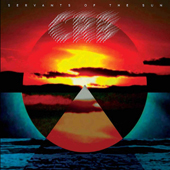 
1. Some Earthly Delights
2. Let it Fall
3. Rare Birds
4. Venus in Chrome
5. Stars Fell on California
6. Comin' Round the Mountain
7. The Chauffeur's Daughter
8. Dice Game
9. Madder Rose In
10. A Smiling Epitaph