When the autobiographical title track kicks off the album, it’s that instantly recognizable Millers’ sound that jumps from the speakers. Despite the many duos we have singing today, none of them sound like Buddy and Julie. It’s their unique blend of voices, Buddy’s churning guitar, and Julie’s songwriting that separate them from others. She wrote 50 or 60 songs for this effort, culled down to a dozen for the album. Both parties admit to wishing it hadn’t taken so long to make this record. Buddy’s schedule, Julie’s health and basic procrastination took hold. Recording began with “I’m Gonne Make You Love Me” in the couple’s bedroom, upstairs from Buddy’s now famous studio. They were so pleased with the emotional stance and punch of the song that Buddy fleshed it out with bass and drums, giving them their first cut. So, they continued to record the demos in what Julie dubbed “Studio B,” deciding they’d do it just as a twosome. There’s both an intimacy and the gritty, rugged rawness long associated with their sound.
The ten-year hiatus hasn’t diminished anything about the Millers” unique partnership. The songs are as good as ever, Buddy still sings passionately and rips his guitar with determined fury. Julie sings as well as she ever has. This long-overdue reunion apparently marks the beginning of a new chapter. Why not? Julie’s already written five times as many songs as they used here. It just feels so natural, so meant to be. For many, Buddy and Julie represent the epitome of Americana music – why we became so attracted to it two decades or more ago. “I’m so proud of Julie and these songs,” Buddy said. “She’s still writing, and everything is of such high quality. I feel like we’re on a roll, so why stop?” Please keep going – restore our musical world order.
- glidemagazine.com 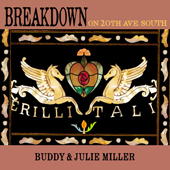