Canadian country-folk singer-songwriter and frontman of Blue Rodeo, Jim Cuddy is set to ease you into the warmer months with his latest album, Countrywide Soul.
Recorded live on the top floor of Cuddy's barn, Countrywide Soul is intended to be as "natural as possible" to keep the "woody sound of the barn board room." It consists of 12 songs, including two new ones, a few covers and some re-worked material from his solo albums as well as from Blue Rodeo.
"When I was choosing songs for the record I tried to find those in which I could change the mood and tone or songs that I felt had been underdeveloped on previous records," Cuddy said in the release.
Two new songs on the album include "Back Here Again," and "Glorious Day"; the former is a classic toe-tapping country song, pining for a lover, with drums, the violin and other string instruments including a banjo playing on the track. The latter is a positive mid-tempo song, with Cuddy sounding like the "cool guy" in the storyline. Strings are a big part and even include a solo, while drums pound, electric guitars electrify and the bass gives the song some extra edge.
With the creativity to recreate all these songs, Cuddy showcasing his vocal abilities and his band coming together to record in a different kind of space, Countrywide Soul is a unique blend of making what is old new again. (exclaim.ca) 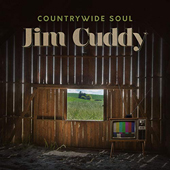 1. All In Time
2. Countrywide Soul
3. Clearer View
4. Everybody Cries
5. Dragging On
6. The Light That Guides You Home
7. Glorious Day
8. Maybe Sometime
9. Back Here Again
10. Almost Persuaded
11. Rhinestone Cowboy
12. Wash Me Down