The Mavericks Play The Hits

The Mavericks are masters of country-Latino-rock 'n' roll. They rode high in the country and rock charts of the '90s with culture-crossing hits like "What A Crying Shame" and "All You Ever Do Is Bring Me Down." In 2004 they went on hiatus to explore new musical avenues. But since a reunion in 2012, the Grammy Award-winning band has reestablished itself as one of the most exciting and joyfully entertaining acts on the touring circuit. Now, on their 30th anniversary, they're back to remind the world why they're so good with the new country covers album, Play the Hits led by takes on John Anderson's "Swingin'" and Freddy Fender's "Before the Next Tear Drop Falls" and featuring Martina McBride plus other special guests. "As musicians, you are always listening to other songs and you find inspiration and you talk about, 'Oh man, one day we're going to record this.' But other things get in the way. You hear every reason in the world as to why not do a covers record, but now we're in charge, so if we're not going to do it now, when the hell are we going to?" singer Raul Malo tells Rolling Stone. 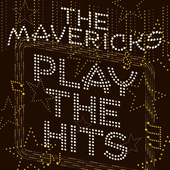 
1 Swingin' - John Anderson
2 Are You Sure Hank Done It This Way? - Waylon Jennings
3 Blame It on Your Heart - Patty Loveless
4 Don't You Ever Get Tired (Of Hurting Me) - Ray Price
5 Before the Next Teardrop Falls - Freddy Fender
6 Hungry Heart - Bruce Springsteen
7 Why Can't She Be You - Patsy Cline
8 Once Upon a Time (Feat. Martina McBride) - Marvin Gaye & Mary Wells
9 Don't Be Cruel - Elvis Presley
10 Blue Eyes Crying in the Rain - Willie Nelson
11 I'm Leaving It Up to You - Dale & Grace