Remixed and Remastered! Elliott's acclaimed 1983 album Party Girls & Broken Poets (nominated for Best Album of the year at the NY Music Awards) is now available in a re-mixed and remastered vinyl edition. The original 24 track analog tapes were painstakingly restored and re-mixed by Gaspard Murphy and the sound is now incredibly sonic and clear. Without interfering with the "integrity" of the original recordings (no new instruments or voices were added) this version of a classic Elliott Murphy album shines brighter then ever. Featuring guest performances by David Johansen (New York Dolls) and Brian Ritchie (Violent Femmes) and including the moving title cut as well as fan favorites such as "Last Call" and "Three Complete American Novels" - Party Girls & Broken Poets can now be heard as it was always meant to be. In a limited vinyl edition 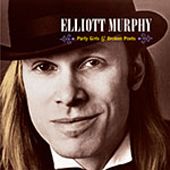 Side Two
1. Party Girls And Broken Poets
2. Like A Rocket
3. Last Call
4. Something New
5. The Streets Of New York