We are offering a spectacular sale on three classic Elliott Murphy albums from the 80s on vinyl: Party Girls & Broken Poets, Murph The Surf and Milwaukee. All three of these have been remastered especially for this vinyl only release and Party Girls & Broken Poets has also been completely remixed from the original 24 track analog master tapes. Each album has been beautifully re-packaged and pressed on 180 gram audiophile vinyl.

Murph The Surf was the album whose success in Europe propelled Elliott to a large following in France, Sweden, Italy, Spain, Belgium and beyond. It features such classic songs as "The Fall of Saigon," "Continental Kinda Girl" and "Dusty Roses" as well as the successful single "Baby I've Been Thinking." The cover photo is by the famous rock photographer Mick Rock, known for his work with Lou Reed and David Bowie (among many, many others).

Milwaukee, rated 4 stars**** by users on All Music Guide and previously out of print, was produced by Talking Heads' member Jerry Harrison and features what might be the definitive song about a life-long love affair with rock 'n roll - "Going Through Something (Don't Know What It Is)." Musicians include Ernie Brooks on bass, Art Labriola on keyboards and the late Jesse Chamberlain on drums. Recorded at DV studios in Milwaukee by David Vartanian, this album was the first release of Elliott Murphy on New Rose Records in France.
Individually these albums are € 19,90¬ each in the store, but you can buy all three for only € 45,00 (plus shipping). It's a great chance to complete your Elliott Murphy vinyl collection. 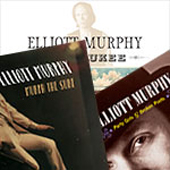 Murph The Surf
Side One
1. Continental Kinda Girl
2. Off The Shelf
3. Baby I Been Thinkin'
4. Modern Romance
5. You Got It Made
Side Two
1. The Fall Of Saigon
2. Dusty Roses
3. Garden City
4. Calling On Cathleen
5. Blue Towers

Milwaukee
Side One
1. Taking The Silence
2. People Don't Learn
3. Out For The Killing
4. Sister Real
5. Everybody Knows (Niagara Falls)
Side Two
1. Running Around
2. Clean It Up
3. "Texas"
4. He Who Laughs Last (Laughs Alone)
5. Going Through Something (Don't Know What It Is)