Daytime Highs and Overnight Lows marks the return of this stellar group fronted by former journalist Eric Brace, on his own respected East Nashville label, Red Beet Records.
Since its beginnings in Washington DC, Last Train Home has been one of the most acclaimed roots-rock bands out there. Between 1997 and 2008, they released six LPs, three EPs, and a live concert DVD, while playing steadily across the country, in the Caribbean, and throughout Europe.
In 2004, Brace and bassist Jim Gray and drummer Martin Lynds relocated to Nashville, and by 2009 the band was feeling the centrifugal forces that pull on every band. While limited touring has continued, there were no further recordings, until now.

In June, 2019, Brace (who has been collaborating with Nashville songwriters Peter Cooper and Thomm Jutz for the past decade), rounded up his LTH cohorts in Washington DC, Philadelphia, and Nashville, for studio sessions that would become the band’s tenth and best recording.
With Brace’s evocative songwriting and his sublime choices of covers, the album’s fourteen songs make an album that passes the drive test: Take a road trip, put on Daytime Highs and Overnight Lows, start at the top and listen all the way down. There’s not a weak or dull moment.
With trumpet and saxophone, harmonica and accordion, pedal steel guitar and glockenspiel – not to mention layers of acoustic and electric guitars and shimmering harmonies weaving with Brace’s warm lead vocals – there is a richness to LTH’s work that you’ll find in few other groups. You can reference the Mavericks, the Nitty Gritty Dirt Band, Sturgill Simpson, the Band, Emmylou Harris, and others, but you’ll never quite pin down the brilliance of Last Train Home. They’ll surprise you with a Barry White cover, make your heart ache with the elegiac “Old Railroads” and “Dear Lorraine,” and make you shake it with their Monkees-inspired “Wake Up, We’re in Love.” From the pure piano-pop of “Happy Is” to the near bluegrass of “Sleepy Eyes,” Last Train Home takes whatever styles strike its fancy and blends them into its own singular sound.
The album cover is another return to form, as the creator of Last Train Home’s debut album art in 1997, Chris Sheban was again enlisted to create the dreamlike scene that is the cover of Daytime Highs and Overnight Lows. Sheban (who has become a well-known children’s book illustrator in the years between these two album covers) took an image that has been stuck in Brace’s head and brought it to shimmering life. (Sharp-eyed fans will recognize the nod to the artwork on the first two LTH records.) With design work from Red Beet Records’ regular graphics guru, Bill Thompson, the album will feel familiar and new at the same time. 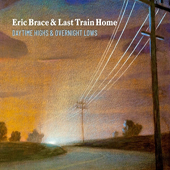