Gettin' By On Gettin' Down

After his last album Concrete & Mud was released in 2018, Sam Morrow found that he was often getting tagged with the “outlaw country” label. That album’s brawny mix of country-funk and retro boogie nodded to the influence of Waylon Jennings and Jerry Reed, undoubtedly, but the Houston native wasn’t entirely comfortable with the categorization.
“Even when I say it out loud, it makes me cringe a little bit,” he says, calling from his current home in Los Angeles. “’Outlaw’ sounds weird. I’m not an outlaw. I play video games and watch sports and stay at home. I’m a homebody. I’m not out there doing badass stuff.”
Morrow eschews many of those obvious classic-country references on his new album Gettin’ By on Gettin’ Down, leaning harder on his deep funk and classic-rock influences. The result is a sinewy, head-nodding listen that attempts to put a pin in some of the outlaw chatter but one that still demands to be played loud at parties.
Working with co-producer Eric Corne, Morrow recorded Gettin’ By on Gettin’ Down at a Los Angeles studio co-owned by the Doors’ Robby Krieger. Rather than sitting down with pen and paper, Morrow focused on finding a guitar riff or a rhythm that felt right and built his compositions from there.
“Most of these songs were reverse engineered,” he says. “I’d start with a groove or a feel. I’d have my drummer send me some beats on his shitty electronic drum set, just record them on his phone, and I would write to those.”
Lead single “Rosarita” — co-written with Morrow’s pal Jaime Wyatt — describes a life on the road and references Morrow’s love of Sneakin’ Sally Through the Alley-era Robert Palmer, while “Wicked Woman” bears some of the tricky New Orleans funk that Lowell George worked into his Little Feat albums. “Sit Crooked, Talk Straight” feels like the closest relative to Morrow’s past country work in terms of structure, but the wah-wah guitars and slinky groove give it a spacious, jammy feel. The title track goes off in another direction entirely, mining the scuzzy glam-rock of T.Rex.
“If you listen to T.Rex’s ‘The Slider,’ at the beginning of that song there’s this really fucked-up drum fill that doesn’t even make any sense at all but somehow the band all starts together,” he says. “We did our own version of that.”
At just nine tracks, Gettin’ By on Gettin’ Down is a quick listen, and the party only quiets down for the final track, “I Think I’ll Just Die Here.” A completely acoustic number that has shades of My Morning Jacket’s Jim James, the song wrestles with discord and the many people with intractable, faulty belief systems that define our present situation. “I’ll drink my Kool-Aid and proudly decay,” he sings at one point.
“They’re OK with feeling the way they do, thinking the way they do, and dying on this hill that’s stained green,” Morrow says. “I’m not overly political, I don’t write a bunch of protest songs. I’m a human being observing that there’s a lot of disturbing things to observe right now. And I’m someone that — I change my mind all the time. Making up a changing mind is how my whole life is.”
It’s the one really serious moment on the album, which largely delivers levity and good humor along with those undeniable grooves. At this stage of his life, with several years of sobriety to his credit, Morrow has learned the best way for him to navigate troubled times is to allow himself to have a little fun.
“Progressively, I’ve sort of taken myself and life a little less seriously,” he says. “That’s a recipe to make me a little happier. If I fall into the trap of taking everything so serious, I get really anxious, I get really depressed. It’s what works for me.” 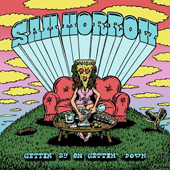