As with intricate artwork, Jason Ringenberg’s new album, “Rhinestoned,” can be appreciated the deeper it is inspected. The diamonds aren’t real but everything else is brilliant and true.
A month spent in the great outdoors followed by quality woodshedding time isolated in the Covid era kindled the songwriter’s thoughtful mind.
That led to Ringenberg’s 18th album, which was released on March 5 on the Courageous Chicken label. “Rhinestoned” features the 62-year-old Nashvillian’s myriad interests, styles and beliefs, all delivered in positively compelling narrative.
Many of the songs on “Rhinestoned” are those that didn’t fit the theme of the 2018’s acclaimed “Stand Tall,” Ringenberg’s first solo album since 2004. (That excludes his four Farmer Jason’s children’s albums.) He, of course, is the frontman of cowpunk heroes, Jason and the Scorchers, which last put out a record in 2010. (tahoeonstage.com) 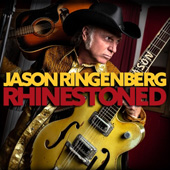 
1. Before Love And War
2. The Freedom Rides Weren't Free
3. Nashville Without Rhinestones
4. The Storms Are On The Ocean
5. Christ The Lord Is Risen Today
6. I Rode With Crazy Horse
7. My Highway Songs
8. Time Warp
9. You Win Again
10. Stoned With Rhinestones
11. Keep That Promise
12. Window Town