Produced by the legendary John Agnello (Kurt Vile, Sonic Youth, Waxahatchee), BE HERE INSTEAD is heralded by today’s premiere of the luminous new single, “The Real Thing” featuring Erin Rae. Millsap’s fifth studio LP and first new album in close to three years, BE HERE INSTEAD marks a stylistic shift from the gritty and high-energy folk of the Oklahoma-bred, Nashville-based artist’s previous output. Mainly recorded live with Millsap’s full band, the album sees a departure from the guitar-and-notebook-based approach to songwriting that shaped his earlier work. Instead, Millsap has followed his curiosity to countless other modes of expression, experimenting with everything from piano to effects pedals to old school drum machines (a fascination partly inspired by the early-’70s innovations of Sly Stone and J.J. Cale). 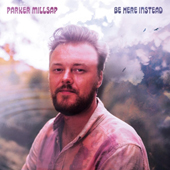