All Of Your Stones

The death of guitar player, songwriter, and founding member of The Steel Woods Jason “Rowdy” Cope on January 16th sent shock waves throughout the independent country and Southern rock world. At the time of Rowdy’s death, The Steel Woods were in the midst of preparing to release what they believe to be their magnum opus, written and recorded with Rowdy called All Of Your Stones. To honor Jason “Rowdy” Cope and to bring his final work to life, and after much soul searching, the remaining members of The Steel Woods have decided to soldier on. 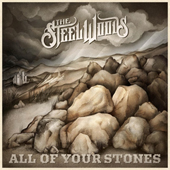