Where The Spirit Rests

The fifth solo album from Chris Eckman (The Walkabouts, Dirtmusic, Distance, Light & Sky) is a deep dive into the vagaries of these extraordinary times. Eckman's luminous songwriting navigates loss, disorientation, redemption and the search for home. Recorded raw and direct with a small ensemble, the record is framed by expansive sonic textures: treated strings, analogue synth drones and ambient guitars. Where the Spirit Rests was co-produced with British electronic composer Alastair McNeill (Ro?s?n Murphy, Yila) and includes an inspired cast of collaborators: pedal steel maverick Chuck Johnson, avant-garde violinist Catherine Graindorge and Dream Syndicate/Green on Red keyboardist Chris Cacavas. The All Music Guide called Eckman "one of the most underrated U.S. songwriters, a man who can pack a short story into image-laden lyrics." The new album - Where the Spirit Rests - is amongst his most personal and vivid. A place to which he has been headed all along. This has been a time that's clawed at our hearts. It's dug deep into our bones. It's been a time to reach for touchstones to help us through it all, whether it's the solace of the familiar or the seeking of something new. For Chris Eckman, the time brought the desire to write songs once more, crafting and shaping the music that would become his new album, Where the Spirit Rests. "I hadn't played a lot of guitar in the last few years," explains Eckman (whose other job is running the global music label Glitterbeat). Even before the pandemic tore the world apart, he'd been confronting difficult changes in his personal life. Picking up the instrument again brought a muscle memory, a lifeline. It was a return to the things he'd known for decades as a musician. "From that, some songs came. They weren't very good at first, then around spring things started to grow." Songwriting brought a way to navigate his life, to articulate the thoughts and emotions tumbling around his head. At that point, though, they were only songs; he had no thought of making them into an album. "There was no deadline, there wasn't even a project; I had time to think about words and lines," he recalls. "I ended up with between 15 and 20 songs. Seven made it onto the record." The contributions ranged from the simplicity of McNeill's disquieting synth drone under "Early Snow" to ambient country pioneer Chuck Johnson's atmospheric pedal steel on "This Curving Track." Eckman was wary about approaching him, as he releases Johnson's acclaimed albums via his label. But in the end that was no problem; it turned out Johnson had been a fan of Eckman's former band, The Walkabouts. Old Seattle friend Jon Hyde brought woozy, boozy carousing steel sounds to "Drinking in America," a track that teeters on a knife-edge of violence - what Eckman calls his "break up with America song." Violinist Catherine Graindorge, who orchestrated "Cabin Fever" and the title track, brought the kind of colours and unpredictability that's highlighted her work 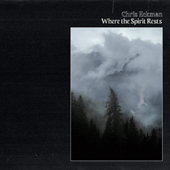