Once again accompanied by the current Son Volt line up – keyboardist/steel guitarist Mark Spencer, bassist Andrew Duplantis, guitarist Chris Frame and drummer Mark Patterson – Farrar takes a slight turn from 2019’s politically pointed Union to a series of songs that asks questions rather than demanding answers – think of “Living in the U.S.A.” as Farrar’s version of Bruce Springsteen’s “Born in the U.S.A.,” Neil Young’s “Rockin’ in the Free World” or Patti Smith’s “People Have the Power,” an anthem to unite the populace.
One listen to Electro Melodier, which opens with “Reverie,” describing Farrar’s contemplative state gazing out his window, enlivened with Mark Spencer’s “Wichita Lineman” guitar riffs and the lush Big Star melodies, and you wonder why no other rock ‘n’ roll bands or singer/songwriters are making albums like this about what we’re all going through. 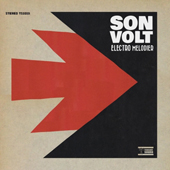