Kaleidoscope Of Shadows: The Story So Far

True West will be celebrating it's 40th anniversary in 2022. This comprehensive legacy collection brings together their three long out-of-print albums, plus rarities, and previously unreleased demos and live tracks, in a stunning 8-panel digipak with 24 page booklet with notes by producer Pat Thomas.
This 3CD deluxe digipak set includes all three of the band's long out-of-print studio albums (Hollywood Holiday, Drifters, Hand of Fate) and is the first time on CD for Hand of Fate (with 3 non-LP Bonus Tracks), plus six previously unreleased demos for the third album that never was. Also includes out-of-print rarities including the complete Tom Verlaine sessions and 12 previously unreleased live tracks recorded in Stockholm, Hamburg, NYC, and New Orleans. 61 tracks in total. While not one of the original four Paisley Underground bands, Russ and Gavin shared musical lineage with Steve Wynn and Kendra Smith from the Dream Syndicate, so True West often shared bills with that band, 3 O'Clock, Rain Parade, and also the paisley adjacent Green On Red and Long Ryders. While often lumped together by journalists with the PU, True West blazed their own trail of two guitar prowess that brought them to the attention of Television's Tom Verlaine who produced three tracks for them at upstate NY's Bearsville Studios. By summer 1985, the band had toured Europe with cover stories in NME, Melody Maker, & Sounds. They joined R.E.M on the Western U.S. and Canada leg of the Fables of the Reconstruction tour, returned home to record demos for a third album that never happened as planned as guitarist/songwriter Russ Tolman left the band. True West soldiered on without Tolman, releasing Hand of Fate in 1986. 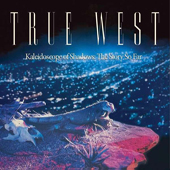