It’s a weird way to describe music, but there is something very comfortable about Share the Love, Greg Keelor’s sixth solo album. Maybe it’s the familiarity of the Blue Rodeo co-founder/co-leader’s unvarnished warbling or his songwriting style, which occupies that shapeshifting space between folk, pop, and country often slapped with the Americana qualifier.
It could also just be the album’s vibe. As the story goes, Keelor had studio-recorded versions of these songs ready to go when the pandemic hit. After sitting on the finished album for a while, the singer/guitarist decided to try recording them live and did, over two days, in a community centre near his Kawartha farm with some esteemed musical pals including Melissa Payne, Glenn Milchem and James McKenty and Jim Bowskill, who also co-produced. Share the Love is the result.
At times, Keelor sounds like a man invigorated: the driving, propulsive “Black Feather” might have been a Blue Rodeo outtake circa Nowhere to Here. Then there’s “Me & Mr. Hohner,” the album’s sole cover which happens to be a growling 1960s-era counter-culture anthem by Bobby Darin and sold as such here by Keelor, whose faithfulness to the original surely suggests that the more things change, the more they stay the same.
Elsewhere, Keelor sounds seriously smitten. Both strummy, bracing, Laurel Canyon-esque lead single “Wonder” and the intimate ballad “Caolaidhe” are knock-kneed odes to a woman (women?) who seems to be much more than a friend.
The album’s last three songs — the barn-burning, guitar-drenched scorcher “Feather Witch,” the stone-cold heartbreaker “What Am I Gonna Do,” and the gently acoustic “Goodbye Baby,” which lands like pale April sunshine at 7 am — infuse the collection with its most tangible heft. And yet… they go down easy, even as the latter two songs detail the bitter flipside of giddy love of the sort articulated in “Wonder” and “Caolaidhe.”
A possibly relevant sidebar: Feathers surface frequently on Share the Love. In addition to the songs “Black Feather” and “Feather Witch,” “Wonder” contains two references (“your eyes like beams of emerald green/your lips like cherry wine/and the feathers on your body/are a wonder to behold” and then later, “is it so wrong to be wanted/like a feather loves the sun” even though the liner notes say “like a rainbow loves the sun”).
Associations with freedom, transcendence, and communication with spiritual realms notwithstanding, the feather imagery suggests Keelor has found a deeper connection to music than ever, and it shows in the relaxed grace of these contemplative and compelling songs.
(partonandpearl.com) 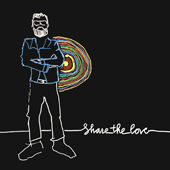