John R. Miller is a true hyphenate artist: singer-songwriter-picker. Every song on his thrilling debut solo album, 'Depreciated', is lush with intricate wordplay and haunting imagery, as well as being backed by a band that is on fire.
One of his biggest long-time fans is roots music favourite Tyler Childers, who says he's "a well-travelled wordsmith mapping out the world he's seen, three chords at a time." Miller is somehow able to transport us to a shadowy honkytonk and get existential all in the same line with his tightly written compositions. Miller's own guitar-playing is on fine display here along with vocals that evoke the white-waters of the Potomac River rumbling below the high ridges of his native Shenandoah Valley.
'Depreciated' is a collection of eleven gems that take us to John R. Miller's home place even while exploring the way we can't go home again, no matter how much we might ache for it. On the album, Miller says he was eager to combine elements of country, blues, and rock to make his own sound. He wanted 'Depreciated' to conjure references to recently lost heroes like Prine, Walker, and Shaver without sounding derivative. Miller has certainly achieved his own sound here with an album that is almost novelistic in its journey not only to the complicated relationship Miller has with the Shenandoah Valley but also into the mind of someone going through transitions."I wrote most of these songs after finding myself single and without a band for the first time in a long while," Miller says. "I stumbled to Nashville and started to figure things out, so a lot of these have the feel of closing a chapter." 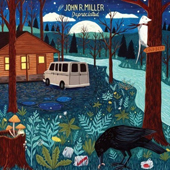