The return of the Cowpunk/Alt-Country/Americana innovators.
First new full-length release in over three decades.
Featuring all four original members of the band.

The Rave-Ups’ three albums established the group as one of the pioneers of the cowpunk genre that eventually transformed into Americana, following in the footsteps of L.A.-bred country-rock groups from The Flying Burrito Brothers and The Byrds through contemporaries like X, The Blasters, and Rank + File.
1985’s independently released Town + Country culminated with the band’s name being scratched onto a notebook in John Hughes’ Sixteen Candles, as well as the band appearing as themselves in Hughes’ follow-up, Pretty In Pink. That success led to major label interest, and the band released 1987’s The Book of Your Regrets and 1990’s Chance, both for Epic Records. Singer/guitarist Jimmer Podrasky would leave the band at that point to raise his son–the namesake of their final album.
The original Los Angeles lineup—singer/songwriter Jimmer Podrasky, guitarist Terry Wilson, bassist Tommy Blatnik, and drummer Timothy Jimenez, who first met while working together in the A&M Records mailroom, reunited for reunited five years ago to play Town + Country at a record release party for that album’s reissue (with 11 bonus tracks) on Omnivore Recordings, but a full-fledged reunion wasn’t in the cards until Jimmer and Tim hooked up at the latter’s studio. When they were eventually joined by Terry and Tom, it was clear this was not a Jimmer solo project—but a full-on Rave-Ups revival. 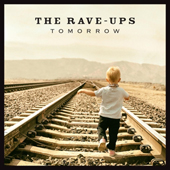