The Devil And The Deep Blue Sea

After almost a year of releasing monthly pairs of singles, Amanda Anne Platt & The Honeycutters complete a musical journey with the release of The Devil and The Deep Blue Sea, a double album out now from Organic Records.

“This album,” says Platt, “has been a wild ride — both in the global and personal events that took place during its creation and in the creation itself.” Wild ride though it may have been, The Devil and The Deep Blue Sea reveals, in its elegant, heartfelt combination of sweeping concept and intimate execution, an artist at the height of her powers, fronting a band exquisitely attuned to the blend.
Technically, the album is a compilation of all those singles, mostly released between April and December of 2021 (“Desert Flowers” and “There May Come A Day,” released together in the fall of 2020, served as a prequel) in pairs that reflected the two sides of the titular dualism. As Platt told it early on, “I’ve always liked that saying. For me, the two groupings of songs represent different sides of the creative process, with The Devil including the more manic, upbeat, outgoing — maybe even grotesque at times — and The Deep Blue Sea being more reclusive, contemplative, understated. As an artist I’ve spent a long time judging myself when I’m at either extreme, so it’s nice to have an opportunity to celebrate the balance they provide one another. As a good friend of mine put it, ‘Sometimes you’re drowning in The Deep Blue Sea and you need The Devil to pull you out.’”
Yet even as its original, “deconstructed” release pattern invited close-up contemplation of each track, The Devil and The Deep Blue Sea stands as an organic whole, with each disc devoted to one of those poles, ordered in the same sequence (except those two prequel singles, now serving as postscripts) in which they were released. Across the score of songs, themes emerge — departures and returns; slow-burning realizations and sudden insights; constancy and faithlessness; families beginning and ending; the turning of the seasons and more — and are woven together in a cascade of memorable melodies, elaborated and commented upon by the empathetic musicality of The Honeycutters, who always manage to find just the right timbres and textures to flesh out each of Platt’s songs. From the opening “New York,” with its punchy rhythms and hypnotically alternating chords, through the languid, rounded tones of “Another Winter Gone,” the rolling finger-picked guitar and ghostly organ behind the wistfully meditative “Always Knew” and on to the rocking “Girls Like You,” each song both stands on its own and contributes to the cumulative impact of the full set. 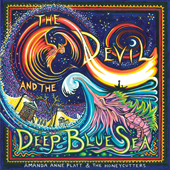