Blue Water Highway runs just outside of Freeport up towards Galveston along the Texas Gulf Coast. This is the part of the world where the cultures of Texas and Louisiana collide in a unique melting pot steeped in the traditions of the people of both states. It is here, in the town of Lake Jackson, TX, that Zack Kibodeaux and Greg Essington grew up, became friends, and began playing music in local coffee shops and bars. After High School, Greg headed to New York City to pursue a degree in music technology. Zack went to Texas State in San Marcos to study vocal performance, specifically opera. Zack would eventually coax Greg back to Texas to form the band they dubbed Blue Water Highway after the stretch of road that their lives centered around on the coast of Texas. 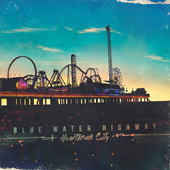