American rock and roll institution BoDeans sounds as fresh and engaging as ever on the band’s 14th studio album 4 The Last Time. The record is full of the kind of tight songwriting fans have come to expect from BoDeans but, this time out, the material has been given a compelling twist. Bandleader Kurt Neumann wrote, recorded, engineered, mixed, and produced the songs, played every instrument himself, and even hand-built the guitars he used on these sessions.
This Renaissance Man approach gives 4 The Last Time a personal flavor and vibe that’s light years beyond the raucous roots rock of the early BoDeans but still retains the magic that turned the group into Midwest rock royalty. Neumann still has a lot to play and say and this pure solo recording method gives him the space to get it all out.
Longtime BoDeans followers will undoubtedly love all the songs on 4 The Last Time. Even so, be sure to dig deep cuts “A Little More Time” and “How To Say Goodbye.” Kurt Neumann is still leading his beloved BoDeans forward with catchy guitar music that will outlast us all. You’ll be listening to this record all summer, guaranteed.
www.rockandbluesmuse.com 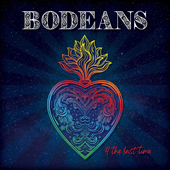