Wings On My Shoes

Will Hoge is a mainstay of 21st century rock & roll, carrying the torch for a blue-collar sound rooted in ringing Telecaster guitars and anthemic songwriting. He makes music for roadhouses and rallies, for car stereos and dive-bar jukeboxes, for Saturday night hell-raising and Sunday morning comedowns. In an era of social media influencers looking to fast-track their way to fame, Hoge has proudly taken the long way around, dedicating himself not to the destination, but to the journey itself.
The trek continues with Wings On My Shoes, the twelfth studio album in a career whose milestones include Number One hits, Grammy nods, major-label record deals, and hard-won independence. Written amidst the doom and gloom of a pandemic that brought his touring schedule to a standstill, it's a record that seeks out silver linings, emphasizing bright moments over looming darkness. For Hoge, Wings On My Shoes also marks a recommitment to the amplified Americana sound that's earned him a global audience, as well nods from Rolling Stone, Forbes, and NPR.
Recorded during a week's worth of live performances at Nashville's Sound Emporium Studios, Wings On My Shoes spotlights the chemistry shared by Hoge and his group of hard-touring road warriors: guitarist Thom Donovan, drummer Allen Jones, and bassist Christopher Griffiths. Hoge pulls triple-duty as the album's writer, frontman, and producer, while guest multi-instrumentalist Joshua Grange adds touches of pedal steel and organ throughout. Featuring few overdubs and zero studio trickery, Wings On My Shoes stands tall as a document of a hardscrabble band at work, wearing its rough edges with pride, sweating and stomping its way toward rock & roll redemption.
"There are common things we all love — the Beatles, the Stones, the Mount Rushmore of rock music — but everyone brings their own influences to the table," Hoge says of Wings' lineup, whose members previously joined him on Tiny Little Movies and My American Dream. "Allen comes from a punk-rock background. Christopher is a Detroit native with Motown influences. Thom loves Johhny Marr and does great things with guitar effects. As we're arranging the songs, I'm encouraging these guys to push a little bit and help steer. I don't want to make a record where I play everything, because that defeats the whole purpose of ensemble playing. I'm trying to incorporate everyone else's gifts into what we're doing."
At its core, though, Wings On My Shoes remains a songwriter's record. Hoge began writing these 10 songs months into the Covid pandemic, his world rattled by the isolation that came with the world's shelter-in-place recommendation. "I was a mess," he remembers. "I didn't realize how much this touring lifestyle had afforded me a certain level of built-in vulnerability and connection with people. Normally, you get into a van with a group of musicians, and you naturally hang out during the weeks that follow, and there's a communal aspect. There's a feeling of being connected. I'd gotten used to that, and without it, I went through something of a nervous breakdown. I needed to recenter myself." 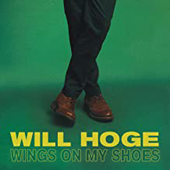