This is a pre-order. The item won't be shipped before 02.09.2022. If you want to order other items please place a separate order so those items are not delayed.

An album counts the miles and years. It's a set of stories about people, about emotions and follies, and triumphs. About the changes in life. The Gristle & Bone Affair, Terry Lee Hale's 14th record, the second he's made in his home of 20 years in France, and first in his recently adopted city of Marseille. This finds him considering the life he left behind in the US, his time in Europe, and at some of the things the future might hold. It's an album that's taken time, three years in the writing and recording that started before the pandemic stopped the world. It also marks a vastly different approach to writing songs for Hale. Instead of the fingerpicked guitar front and centre, often his hallmark sound, now the instrument - and his voice - stand as the bedrock of all the music here; he's become part of the ensemble "I'm older, content to step back and let the music speak for itself," he explains. "It's enough to contribute at a base level, to be part of a collaboration. I wanted to leave room for others to fill in their parts. We all recorded separately, no choice with the lockdowns. I had no idea what the others were going to do." Those collaborations bring together several strands of Hale's life. He's covered a lot of distance in his time, but one of the most important stops was in Seattle, a place he says was "foundational." He was the only singer-songwriter on Sub Pop 200, the compilation that announced grunge and brought the city to the music world's attention. It was in Seattle that he released his first LP, and came to know many of the musicians, like Jon Hyde (case/lang/veirs, Jim White) who adds steel guitar here. He also formed a close, lasting friendship was Chris Eckman of the Walkabouts, who's produced The Gristle & Bone Affair, as well as several of Hale's earlier albums. "He did everything from taskmaster to hand-holder. He's been involved with so many of my records, I trust him implicitly. He keeps me focused." It's a disc that features his voice, which has developed with age into something weathered and filled with gentle insights. He's never sounded better than he does here. Listen to the opening track, "Oh Life," where ?iga Golob's (Chris Eckman, Steve Wynn) warm, plucked notes on the contrabass makes an introduction for Hale's crisp yearning falsetto calls, an evocation of an American West that's all but vanished. This time around, there's only one track where Hale's guitar stands out alone, the sole instrumental on the album, "Doesn't Matter Anymore." It's a simple piece, one that was "older," Hale says. "It's been lying around for a long time. It gives a breathing space between the songs, very evocative of bars, and I've played many of those. It's a basic chord progression, but one that sounds quite universal." As producer, Eckman suggested some artists Hale had never worked with, like Catherine Graindorge (Iggy Pop, Nick Cave), whose violin work haunts "Oh Life" like a beautiful ghost, adding a deep resonance to the song. 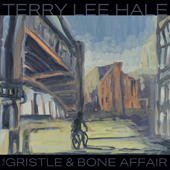