"If you can't say it, you don't have to," sings John Fullbright on "Bearden 1645," the opening track to his new record "The Liar". The song details Fullbright finding refuge in playing the piano, starting as a child and still today. For fans, it may feel like a bit of a rebuttal to "Happy," the opener from 2014's "Songs," one of several in his repertoire that speak explicitly about mining one's angst in order to make music. In that way, "Bearden 1645" is also a firm nod to the fourth wall: Fullbright knows you're thinking about his songwriting. He is, too - but not quite the way he was before. The public at-large hasn't heard much from him since the critically lauded "Songs," a chasm of eight years that seemed unthinkable for an artist with so much hype surrounding his early career. Why did it take so long? "Honestly, I don't know, and that's been the scariest question to think about and the hardest one to answer," Fullbright said. Maybe it was a tacit rejection of mounting industry pressure, mixed with a little fear. Or maybe it was the adjustment to a massive upheaval of his way of life. Whether we bore witness or not, it?s been a critical period of change for Fullbright, now in his 30s. Since his last release, he moved out of rural Oklahoma - the aforementioned Bearden has a population of about 130 people - to Tulsa. Once there, he worked to build a place for himself in the context of an established and vibrant musical coterie, performing often as both a bandleader and, more curiously, a sideman: storied loner John Fullbright lugging a piano from this small stage to that one with an uncharacteristic looseness. "It's been a process of learning how to be in a community of musicians and less focusing on the lone, depressed songwriter - just playing something that has a beat and is really fun," Fullbright said. "That's not to say there are no songs on this record where I depart from that, because there are, but there's also a band with an opinion. And that part is new to me."
"The Liar" was recorded at Steve and Charlene Ripley's farm-to-studio compound in northeastern Oklahoma. After Steve's passing, Charlene flirted with the idea of selling the studio property, so Fullbright mobilized quickly to ensure he was able to record there before it changed hands. He threw together a band made up of, as Fullbright calls them, "the usual suspects." Anyone fleetingly familiar with Oklahoma music will recognize the roster, which includes Jesse Aycock, Aaron Boehler, Paul Wilkes, Stephen Lee, and Paddy Ryan, all of whom are in more bands than seems possible. Along with a few more friends stopping in to lay down takes, they finished the songs and tracked the album with engineer Jason Weinheimer in a whirlwind four days. "It was such a collaborative thing with some really cool voices," Fullbright said, expressing surprise at the ease of the process. "It's just like playing music in Tulsa." 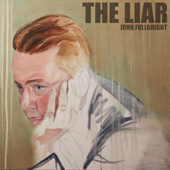