2018 release. 13 Rivers is the artists first self-produced record in over a decade. 13 Rivers is a very stripped down, bare-bones recording and, according to Thompson, the album is a reflection of current events that have happened in his life. "This has been an intense year for myself and my family, getting older doesn't mean that life gets easier! There are surprises around every bend. I think this reflects in the immediacy of the stories, and the passion in the songs. Sometimes I am speaking directly about events, at other times songs are an imaginative spin on what life throws at you. The music is just a mirror to life, but we try to Polish that mirror as brightly as possible." The album was recorded at Boulevard Recording in Los Angeles, California. 13 Rivers features Richards regular accompanists, Michael Jerome and Taras Prodaniuk, as well as Thompsons guitar tech, Bobby Eichorn, on second guitar. Each track on the album was recorded in analog, with minimal overdubbing. 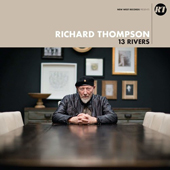