Message From The People Revisited

From the Band Of Heathens on why they chose to record their own version of this entire album:
Ray’s voice became the voice of an elder—a true master was speaking to us from the past. There is sorrow, protest, and anger but also resolve, hope, and deliverance. On the final track of the record, Ray saved us the most powerful message and the perfect coda. The definitive version of “America The Beautiful” is absolutely glorious. It is quite simply the apotheosis of soul. Ray may as well have been singing that to us from a mountaintop because that’s what it felt like in that moment. “America! God done shed his grace on thee! He crowned thy good, he told me he would, with brotherhood from sea to shining sea!”

In December 2017 we were working as a backing band on a variety of projects for other artists. The sessions were taking place at the Finishing School, a studio built by close friend, producer, and musical collaborator, George Reiff, who tragically succumbed to cancer in May ’17 after a 10-month fight. The studio had been dark since George’s passing. With the blessing of the Reiff family, the lights were turned back on and we went to work for a few weeks. The final four days of session time were blocked off for us to work on something of our own. A few weeks prior to the sessions it was collectively decided that we would use that time to take a shot at recording some of (whatever we could get to) A Message From The People. Working alongside our close friend (and George’s right-hand-man in the studio) Steve Christensen, there was a palpable vibration in the air. It was somber but also very peaceful. Our expectations were set low as we knew that doing any Ray Charles record justice was going to be a real challenge — let alone one with such lush arrangements.

To our amazement, after four days we had finished the record. It was a beautiful process that simply flowed in a workmanlike manner. In between takes we frequently reminisced about George and were even visited at the studio by some of George’s close friends and family. Feeling confident that what we had accomplished was going to be worthy of a release, we unanimously agreed that it would be dedicated to the memory of George and that proceeds would go to a charitable organization that focused on social justice.

Going forward, our hope is that our performance of these songs has sufficient merit to carry the listener without distraction to the musical feeling that we strived to accomplish in these recordings — a spirit of brotherhood, hope and understanding, liberty, and justice for all. 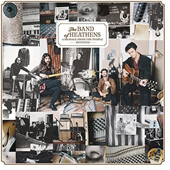 1. Lift Every Voice and Sing
2. Seems Like I Gotta Do Wrong
3. Heaven Help Us All
4. There'll Be No Peace Without All Men as One
5. Hey Mister
6. Look What They've Done to My Song, Ma
7. Abraham, Martin and John
8. Take Me Home, Country Roads
9. Every Saturday Night
10. America the Beautiful