Downhill From Everywhere / A Little Soon To Say

Browne has been writing “Downhill From Everywhere” for nearly 10 years. The song was featured in the trailer for an upcoming documentary, The Story of Plastic, premiering on Earth Day via the Discovery Channel. The film details the plastic crisis and the pollution that spans three continents — and the devastating effect it’s had on the planet. Browne himself is a member of the Executive Advisory Board of the Plastic Pollution Coalition, an alliance that strives for a future free of single use plastic.
“Plastic is a great and really useful thing, for medical uses for instance,” he tells Rolling Stone. “But it’s just absurd that we use it to deliver things like water. That bottle will be around for hundreds of years and does not biodegrade. This movement has got a lot of attention and a lot of support, because it’s so visible now. It’s no longer something that can be sort of swept under the rug.”
(rollingstone.com) 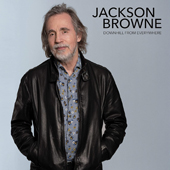 
Side A
1. Downhill From Everywhere
Side B
1. A Little Soon To Say