Trends come and go, yet Will Hoge remains a mainstay of the Americana landscape, hitting the road year after year, turning new pages of a career whose twists and turns - including No. 1 hits, a near-death experience, major-label record deals, and hard-won independence - sound like stuff of some long-lost movie script.Maybe that's why his eleventh album, feels so cinematic. Recorded alongside Hoge's band of road warriors, the album brims with the same electric energy that fuels his shows. These are songs for highways, hotels, the heartland, and those all-too-brief moments at home, glued together by self-reflective lyrics that find Hoge making peace with life, love, and the long ladder that leads to success. 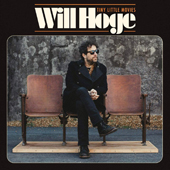