Treasure Keepers is the first real solo album by singer-songwriter Ad Vanderveen.
Performed alone in a studio / theater ambience with no audience, it features nine and a half new original songs and one and a half covers. The content and poetry are of a personal / spiritual / topical nature and are kept center-stage, framed by a variety of sounds, ranging from airy acoustic to grungy electric.
Starting off with a dedication to colleague, friend and mentor David Olney, who recently passed away, Vanderveen’s songs address subjects like life and death, creativity, change and pandemic times, as well as love transcending all of these in some more meditative pieces. The disc ends with Motherland, a grungy electric rendition of the Dutch national anthem, with Vanderveen’s own lyrics taking it to a more universal and spiritual plane.
The other cover on Treasure Keepers is ‘If I Can Do It So Can You’ by Lee Clayton, a song Ad claims had a life-changing impact on him in the late 1970s. While the performances are spontaneous and minimal, the soundscape is intricate and has been realized with help of the the finest of people and equipment available in the field of audio.

Ad Vanderveen about Treasure Keepers:
“I’ve often heard myself say ‘a song should be able to stand on its own two feet, but I’d never really made a record like that. It was time to practise what I preach: one shot on the spot with no overdubs – a bold and daring choice if I do say so myself – and if a song wouldn’t stand up to it, it simply wouldn’t come to life. It took a sense of ruthless vulnerability to present my new material in this way that turned out feeling very rewarding”. 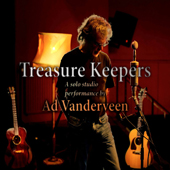 
1 David and Goliath
2 Treasure Keepers
3 End Of Me and You
4 Sixty Thousand Thoughts
5 Death Is For Others
6 Looking Through Your Eyes
7 Puppet Show
8 Times Like these
9 If I Can Do It, So Can You
10 Lonely You Are
11 Motherland