Austin’s own SHURMAN are finally back with a new album! 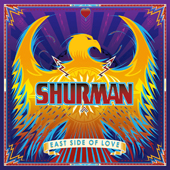 Put aside any and all preconceptions you have about SHURMAN. The Austin, Texas-based quartet’s latest offering, East Side Of Love, finds them connecting with each other and their audiences on a completely different level. The album retains their trademark combination of high-energy roots rock and country soul, while possessing an expanded dimension due to the mixture of harrowing pain and unmatched creative joy they experienced since we last heard from them.

Shurman – Aaron Beavers (guitar, vocals) Mike Therieau (bass, vocals), Harley Husbands (lead guitar) and Clint Short (drums)- produced East Side Of Love as a result of loyal fan-funded support coming from both sides of the Atlantic Ocean; the band’s European fan base remains large and enthusiastic. But that’s not the main reason for the length of time between albums.

Beavers, the band’s founder, experienced dramatic changes in his life and needed to time to process them. The story of loss, and eventual reemergence as a stronger, more confident, just plain better songwriter and musician, is evident in these songs in a multitude of ways. This is a story that might have been told before but never with this kind of flavor and mettle.

In 2013, recording had already begun with long time compadre Jono Manson in Santa Fe when Beavers was forced to return to Austin and confront an impending divorce. „I hate to say this because it’s such a cliché line,“ Beavers relates, „but everything happens for a reason. The record we were starting to make at Jono’s was a completely different record, with a different group of songs. Actually, three or four songs that made it through to this record, but I was thrown into a completely different headspace. I continued writing songs during that time but they were obviously a bit more somber and introspective. When we picked the songs for East Side Of Love, we chose most of the newer ones because they were the songs that really struck a chord with us.“

Recording recommenced at Austin’s legendary Cedar Creek Studios in 2014, but in August of last year Beavers decided to take a break from the band and music altogether. The future of Shurman looked bleak. At the suggestion of longtime friend and Sin City Social Club founder Shilah Morrow, they regrouped for a performance at South by Southwest in March 2015. „How could we not play a festival in our own town?“ Beavers asks. The band ended up playing seven shows.

The real turning point came in June 2015 after their performance at the Circus Mexicus music festival. It was their tenth appearance at the annual event held in Mexico and hosted by Shurman’s old tour mates and like-minded roots rockers Roger Clyne & The Peacemakers.
„I had friends who pulled me off of the sidelines,“ explains Beavers. „They gave me a kick in the ass. When I got to the Mexico show I realized how important our connection was to our fans and how much I loved playing music with these guys.“ The band played in front of 6000 music fans. „People had Shurman tattoos, our old tour t-shirts on, and were singing along to all of our songs. Honestly, THAT was better than any major label success or being on the cover of Rolling Stone.“ After the fest, where the band sold out of merch, they sat down for a meeting.
„I told ‚em even if we wanted to walk away from it, I don’t think we can,“ he adds with a chuckle.

Those events set into motion the release of East Side Of Love on their own Teletone Records in the U.S. and on Germany’s Blue Rose Records in Europe. It is a powerful work comprised of 11 heartfelt songs telling the story of losing a relationship, while actually getting back a band.
From the anthemic set-opening title track, to the gritty soul of „You Don’t Have To Love Me,“ through the heart-wrenching, acoustic ballad „I Don’t Know Why,“ to the bright and hopeful album closer „Time To Say Goodbye,“ it bears traces of Shuman’s reputation for relentless live energy and yet comes across as clear-eyed and genuine as anything in the band’s 15-year career. Shurman’s previous label releases on Vanguard and Universal Republic were admittedly geared towards Friday and Saturday night, but East Side Of Love sounds like a record made for Sunday afternoon. It takes you on a journey through the ups and downs of life while reminding you that you can still find redemption no matter where you have traveled.
„Before we took a break, I found myself just going through the motions, not really enjoying the moments when I was on stage,“ Beavers recalls. „I’m grateful that the friendship is back in the band. It’s like a brotherhood. We decided we’re going to be friends even if we stopped playing together. I remember the day Harley called and said, ‚it’s time to get back on the horse-let’s get the boys together.‘ There is a total different attitude and vibe in the group now and I’m so grateful that we stuck around.“ He laughs. „We decided to make the most of our time together. You can’t control what is happening in the music business so let’s just try to have fun and be happy.“

Kommentare deaktiviert für Austin’s own SHURMAN are finally back with a new album!