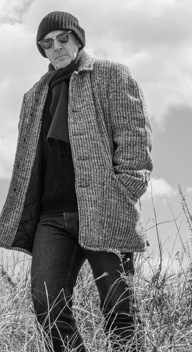 We have been shocked by the news that longtime Blue Rose family member Chris Burroughs has passed away on Monday, November 19. We don’t know yet what has happened but his death came so unexpected that we still have no words how to express our sadness. Our thoughts and prayers are with his wife Kelly and his son Henry.
Chris Burroughs was one of the very first artists we got signed for Blue Rose. When we had the idea to start a now called „Americana“ label co-founder Edgar Heckmann went through his record collection looking for artists and bands who would fit on the roster and at capital „B“ he stopped and grabbed two records of Chris which had been released on the French label New Rose Records – „West Of Texas“ and „Trade Of Chains“. This had happened in 1995 when the internet and email communication was in its fledgling stage and not easy to get in touch with artists overseas. But somehow we made contact, signed a deal and with the catalog number BLU CD0021 Chris‘ third album „Clutter“ was released in 1996. Three more albums followed in 1997 (a compilation of songs from his New Rose releases), 1998 („Liberty“) and 2000 („Loose“). In 2001 he started a „Blue Rose supergroup“ with Todd Thibaud, Joseph Parsons and Terry Lee Hale – Hardpan. After a critically acclaimed album and an extensive European tour in 2002 Chris spent years at home but was never forgotten by his German fans. The longer he was absent the more people asked about a new Chris Burroughs album. Once in a while he returned to Europe for some solo shows but that was it – until 2013 when Hardpan did a reunion show at the Blue Rose Christmas Party at the Blues Garage in Isernhagen. Chris spent most of the time on stage that night acting as the leader of the „Blue Rose Rockestra“ – we have never before seen him so funny, so much laughing, so enjoying the show. That night was the impact for all the four members to talk about a new Hardpan album which was eventually released in 2017 featuring three new Chris Burroughs songs. A successful tour followed which brought back the spirit of a unique collaboration.
Chris Burroughs will be dearly missed. He will always be in our hearts as a dear friend and a great musician. Rest in peace, Chris.