€ 0,00
Take one part Laurel Canyon – LA 1969, one part The Band – Woodstock 1971 and one part Grateful Dead – San Franscisco 1971. That is the classic and magic recipe of great rock music. It may sound simple, but we’ve seen so many bands try it and fail miserably. But don’t despair – here’s Cordovas! A Nashville based band that, with seemingly unlimited skill and feeling, manage to not only recreate, but also develop the this magnificent musical heritage. 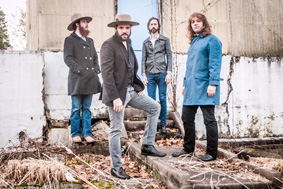 With a bunch of great songs and harmony vocals like it were the seventies, the self released debut album of Cordovas was released in 2012. They did one tour and sold the 1000 copies they printed right away. And then the band disappeared and left behind a bunch of fans that suddenly realized that their new favorite band probably did’t exist.

About a year ago we picked up a rumor that Corovas were back on the roads and doing great. It turned out that the three year hiatus was exactly what the band leader and musical genius Joe Firstman needed to fulfill his vision of creating the best band in the world.

This is a dream come true! Rootsy Music is proud to a rerelease of the amazing debut album on CD and vinyl (for the first time ever).