New release on Blue Rose:
PAUL THORN – Too Blessed To Be Stressed 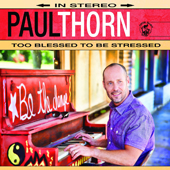 Blessed To Be Stressed will be available through our webshop now and at stores all over Europe in mid September.

Paul Thorn’s new album Too Blessed To Be Stressed stakes out new territory for the popular roots-rock songwriter and performer. “In the past, I’ve told stories that were mostly inspired by my own life,” the former prizefighter and literal son of a preacher man offers. “This time, I’ve written 10 songs that express more universal truths, and I’ve done it with a purpose: to make people feel good.”

Which explains numbers like the acoustic-electric charmer “Rob You of Your Joy,” where Thorn’s warm peaches-and-molasses singing dispenses advice on avoiding the pitfalls of life. And then there is the title track which borrows its tag from a familiar saying among the members of the African-American Baptist churches Thorn frequented in his childhood. “I’d ask, ‘How you doin’, sister?’ And what I’d often hear back was, ‘I’m too blessed to be stressed.’” In the hands of Thorn and his faithful band, who’ve been together 20 years, the tune applies its own funky balm, interlacing a percolating drum and keyboard rhythm with the slinky guitar lines beneath his playful banter.Thorn’s trademark humor is abundant throughout the album. “Backslide on Friday” is a warm-spirited poke at personal foibles. “I promised myself not to write about me, but I did on ‘Backslide,’” Thorn relates. The chipper pop tune is a confession about procrastination, sweetened by Bill Hinds’ slide guitar and Thorn’s gently arching melody. “But,” Thorn protests, “I know I’m not the only one who says he’s gonna diet and just eat Blue Bell vanilla ice cream on Sundays, and then ends up eating it every day!”

“Mediocrity Is King” takes a wider swipe, at our culture’s hyper-drive addiction to celebrity artifice and rampant consumerism. But like “Everything Is Gonna Be All Right,” a rocking celebration of the simple joys of life, it’s done with Thorn’s unflagging belief in the inherent goodness of the human heart.

“I don’t think I could have written anthemic songs like this if I hadn’t made my last album,” Thorn says of 2012’s What the Hell Is Goin’ On? Like 2010’s autobiographical Pimps & Preachers, it was among its year’s most played CDs on Americana radio and contributed to Thorn’s rapidly growing fan base. And Thorn followed that airplay success with his AAA radio hit version of “Doctor My Eyes” from April 2014’s Looking Into You: A Tribute to Jackson Browne. The latter also features Grammy winners Bruce Springsteen, Bonnie Raitt, Lyle Lovett, the Indigo Girls, Lucinda Williams, Keb’ Mo’, Ben Harper and Don Henley.

What the Hell Is Goin’ On? was also Thorn’s first set of songs written by other artists, borrowed from the catalogs of Allen Toussaint, Buddy and Julie Miller, and Rick Danko, among others.

“I lived with those songs and studied them before I recorded that album, and that changed me and made me grow as a songwriter,” Thorn relates. “Lindsey Buckingham’s ‘Don’t Let Me Down Again’ especially got me thinking. It was a rock anthem with a sing-along hook, and I fell in love with it and the idea of big vocal hooks. So every song on Too Blessed To Be Stressed has a big vocal hook in it. And it works! We’ve been playing these songs in concert, and by the time the chorus comes along for the second time people are singing along. I’ve never seen that happen with my unreleased songs before, and I love it.”

It helps that those big vocal hooks on Too Blessed To Be Stressed are being reinforced by the sound of Thorn’s flexible and dynamic band, as they have been doing for years in concert. During their two decades in the club, theater and festival trenches, the four-piece and their frontman have garnered a reputation for shows that ricochet from humor to poignancy to knock-out rock ’n’ roll. Guitarist Bill Hinds is the perfect, edgy foil for Thorn’s warm, laconic salt o’ the earth delivery — a veritable living library of glowing tones, sultry slide and sonic invention. Keyboardist Michael “Dr. Love” Graham displays a gift for melody that reinforces Thorn’s hooks while creating his own impact, and helps expand the group’s rhythmic force. Meanwhile drummer Jeffrey Perkins and bassist Ralph Friedrichsen are a force, propelling every tune with just the right amount of up-tempo power or deep-in-the-groove restraint.

“These guys really bring my songs to life,” says Thorn. “A lot of albums sound like they’re made by a singer with bored studio musicians. My albums sound they’re played by a real blood-and-guts band because that’s what we are. And when we get up on stage, people hear and see that.”

Thorn’s earlier catalog is cherished by his many fans thanks to his down-home perspective, vivid-yet-plainspoken language and colorful characters. It helps that Thorn is a colorful and distinctly Southern personality himself. He was raised in Tupelo, Mississippi, in the land of cotton and catfish. And churches

His performances were generally limited to the pews until sixth grade. “I’m dyslexic, and got held back in sixth grade,” Thorn relates. “I didn’t have to face the embarrassment, because my family moved and I ended up in a new school. There was a talent show, and I sang ‘Three Times a Lady’ by Lionel Ritchie with my acoustic guitar, and suddenly I went from being a social outcast to the most desired boy on the playground. The feeling I got from that adulation stuck with me and propelled me to where I am today.”

At age 17, Thorn met songwriter Billy Maddox, who became his friend and mentor. It would take several detours — working in a furniture factory, boxing, jumping out of airplanes — until Thorn committed to the singer-songwriter’s life. But through it all he and Maddox remained friends, and Maddox became Thorn’s songwriting partner and co-producer.

Nonetheless, Thorn possessed the ability to charm audiences right from the start. Not only with his music, but with the stories he tells from the stage. “Showmanship is a dying art that I learned from watching Dean Martin on TV when I was a kid,” Thorn explains. “He could tell little jokes and then deliver a serious song, then make you laugh again. And he would look into the camera like he was looking right at you through the TV. That’s what I want to do — make people feel like I’m talking directly to them.”

That’s really Thorn’s mission for Too Blessed To Be Stressed, which can be heard as a running conversation about life between Thorn and listeners — a conversation leavened with gentle insights, small inspirations and plenty of cheer.

“I wrote these songs hoping they might put people in a positive mindset and encourage them to count their own blessings, like I count mine,” Thorn observes. “There’s no higher goal I could set for myself than to help other people find some happiness and gratitude in their lives.”