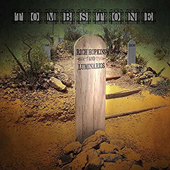 Tombstone with its strong Western movie connotations is a typical title for a Rich Hopkins album – just like El Paso, Dirt Town, The Horse I Rode In On, El Otro Lado and Buried Treasures were before. From the stylistically assured cover and the lyrical themes to the last note of electric guitar reverb, Tombstone keeps its promise. After a two-year hiatus, the album has been eagerly awaited – Rich Hopkins & Luminarios from Tucson, Arizona are one of the most reliable acts on Blue Rose Records. Hopkins’s music is immediately identifiable. The desert rocker may at times be more acoustic-oriented, experiment with border music, psychedelic ingredients or jingle-jangle but on this album he focuses on the no-frills electric guitar rock of his earlier work. The songs show clear contours, their arrangements are simple but their power and vibe are tangible. Tombstone has what it takes to become a classic Luminarios album.

For more than a quarter century Rich Hopkins has been representing „desert rock made in Arizona“ like no one else. Even though he has been active in a number of side projects – with the Sidewinders, Sand Rubies and Underbelly – the Luminarios are a constant in his musical career, even though he is the only irreplaceable member. Since 1992 the Luminarios have been a trio, a quartet, a quintet or simply a loose bunch of musician friends working on a common project. In the beginning, Hopkins played highly electrified, feedback-drenched, guitar-driven music in a Neil Young & Crazy Horse vein. As his songwriting matured he released concept albums and tried his hand at different stylistic approaches. His interest in the common man and life’s circumstances have never wavered, though, and led to social involvement and critical, dedicated lyrics. His 2010 album El Otro Lado/The Other Side in particular dealt with the flipside of the American dream. The last album Buried Treasures from 2012 with its cosmic power, extensive guitar jams and a garage-y high volume sound directly leads to Tombstone.

The songs, mostly co-written by Hopkins and Lisa Novak, tackle life’s major questions, values, virtues and morals – as exemplified by certain characters and situations: What is right or wrong? Did you achieve what you wanted? But don’t worry, the lyrics are not overwrought and Hopkins himself is feeling well. „Don’t Worry“ is the opening number, less of a composition than a spontaneous idea, 5 minutes of take-no-prisoners desert rock with Larry Cooper taking two guitar solos and Hopkins taking three. It is followed by „Everything“, almost a pop song built around Jon Sanchez’s killer riff. The title track is the first stand-out: „Tombstone“ is the not-quite-objective rumination on a historic drama surrounded by three guitars and a 60ies garage band sound. „Home Of The Brave“ takes a look at homeless people (a recurring theme in Hopkins’s oeuvre) and the courage they need to ask – or sometimes beg – for help. The song’s powerful rhythm section and the wall of guitars are reminiscent of Bob Mould’s mightiest work. The guitar punk of „Free Man“ – one of two numbers penned by Lisa Novak – was in the running to provide the album title. „Hang On“ with its catchy guitars and chorus melody will have you hum along. It describes a way to deal with bad news and bad vibes: Hang up, tune out.

An entirely different caliber is „Top Of The World“, a 7-plus minute guitar orgy, drenched in feedback and dedicated to every rock band that didn’t quite make it. At least for a while, they had fun! Rich Hopkins certainly still does when his guitar and that of Jon Sanchez come together. The epic pre-Civil War trilogy of ‚Campfire Chat With Luke And Jimmy‘ (spoken thoughts on war), ‚Private Shaw‘ (an eight-and-a-half-minute epic about native Americans vs. the US Army) and ‚Mourning Song‘ sung by Lisa Novak is another big point winner. And then there’s an abrupt about-face at the album’s end: ‚Leona’s Waltz‘ is an acoustic, pedal steel-driven alt.country waltz in honor of Lisa’s mother Leona Novak, a former pianist in the Southernaires, a 50ies dance combo. Her former bandmate Arnold Parker is the song’s guest vocalist.