THE WYNNTOWN MARSHALS are celebrating their 10th anniversary with the retrospective After All These Years! 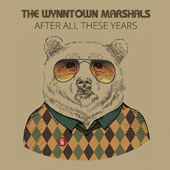 After All These Years
CD
€ 2,50
Three studio albums into the Wynntown Marshals‚ career, the band mark a decade together with the release of a new album entitled After All These Years. Primarily a retrospective look back at some of the recorded highlights of the past ten years, the 16-track collection also includes 3 new, previously unreleased tracks which set the scene for the next chapter in the band’s history.

The Marshals released their self-financed debut EP in 2008. Shortly after this, when invited by a New Jersey-based record label to submit a song for a ‚Hair Metal‘ tribute album, the Marshals chose to reinterpret L.A. Guns‘ homage to Jayne Mansfield, „Ballad of Jayne“; reimagining this glam-rock ballad as a swaggering roots-rock workout, replete with pedal steel, 12-string guitars, and twanging Telecaster. This cover version instantly captured the attention of legendary British broadcaster ‚Whispering‘ Bob Harris, who playlisted the single and championed the band on his BBC Radio 2 show. This led to a live session on the show and previously-closed doors began to open for the band around the UK and in mainland Europe.

Westerner, the band’s debut long-player, was released in May 2010 and was a success with critics across Europe and beyond. A review on the Belgian Americana website ‚RootsTime‘ proclaimed the album as „the best alt.country album from Europe ever“. At this point, the Marshals started to attract the attention of promoters in Europe, and hit the road in earnest, playing gigs throughout the UK and making their first forays in to the Netherlands, Spain, and Germany, building a strong, loyal following. Support slots with Americana luminaries such as Jason & The Scorchers, Richmond Fontaine, and Chuck Prophet followed.

Unfortunately, like many of their peers operating at this level, holding a stable line-up together proved difficult, and this led to several personnel changes. The line-up that put together 2013’s The Long Haul retained frontman and principle songwriter Keith Benzie alongside Iain Sloan (now handling lead guitar duties as well as pedal steel), and a new rhythm section of bassist Murdoch MacLeod and drummer Kenny McCabe. Critics and fans alike agreed that The Long Haul marked a significant step forward for the band, with greater ambition and adventure present in the songwriting, instrumentation, and arrangements.

The new, improved Marshals‘ sound also impressed Europe’s leading roots/Americana label Blue Rose Records – so much so, in fact, that the band were signed up immediately. These sentiments were universally echoed by the press across Europe and America and The Long Haul was placed at number 10 in the Sunday Herald’s list of the 50 top Scottish albums of 2013.

In 2015, Blue Rose Records released The End of the Golden Age – which featured the recording debut of keyboard player Richie Noble; now beginning to stamp his authority upon the band’s sound with Hammond organ, piano and synths coming more to the fore. Following regular trips to northern Europe and the beginnings of sessions for the follow up to yet another critically-acclaimed record, the Marshals started 2017 with a brand-new line-up – the McCabe/ MacLeod rhythm section being replaced by drummer Simon Walker and bassist David McKee.
The Wynntown Marshals‘ lyrics are never throwaway, the subject matter often obscure. World-weary yet uplifting melodies are channelled via strident guitars and gorgeous vocal harmonies, offset by beautiful keyboard parts and driven by a rock-solid rhythm section. Once referred to as ‚The Masters of Midtempo‘, the band can also deftly turn their hand to heart-warming, uplifting powerpop.

There’s something for everyone on this collection. Nostalgic lyrics collide with jangly guitars and killer pop hooks on „Canada“ and the title track from „The End of the Golden Age“. The aforementioned „Ballad of Jayne“ – which, in many ways, embodies the early sound of the band – makes an appearance, alongside another fan favourite „Low Country Comedown“. This track is the Marshals personified, a bittersweet ode to life on the road set to powerhouse guitars, plaintive steel guitar and washes of Hammond organ. Also present is the sprawling, stellar live favourite „Tide“, and singer Benzie’s romantic tribute to the shale bings of West Lothian is brought to life in glorious technicolour in the Americana masterclass that is „Red Clay Hill“. In contrast, the synth-led „Being Lazy“ shows a different side to the Marshals, while still demonstrating characteristically deft songcraft and lyrical depth.

Story songs have been an integral part of the Marshals‘ sound since the band’s inception, and these songs are well represented here; one of the earliest examples, taken from the band’s debut EP, is the epic „11:15“, which tells the tale of the greatest flood in modern UK history which took place in rural Aberdeenshire in 1829. The criminally-overlooked 2009 ‚B-side‘ „The Burning Blue“ is told from the perspective of a Spitfire pilot during the Battle of Britain. The country-shuffle of „Snowflake“ is possibly the only Americana song about a captive albino gorilla in existence, and these themes are carried through into „Moby Doll‘, a languid, heart-breaking song about the first captive orca, told from the perspective of a guilt-wracked journalist. „Thunder in the Valley“, with all its pastoral atmosphere and dynamics, transports you to the high sierra of California’s national parks, and „Curtain Call“ sees things stripped right back to just acoustic guitars, piano, and string quartet – the perfect setting for a tragic tale of a suicidal Victorian conjuror.

The previously unreleased tracks on After All These Years are a real treat for fans old and new. Two of these were recorded as early contenders for a new studio album with long-time producer Andrew Taylor in the drum stool; the very personal lyrical themes of „Your Time“ – another uplifting slice of classic Marshals‘ powerpop, replete with multi-layered guitars and organ – reflect the passing of time in a relationship, and „Odessa“ is an atmospheric slow-burner about another relationship which didn’t quite go the distance. Finally, the reworking of an early EP track „Different Drug“ (recorded by the current line-up) features a sublime extended outro and is another wonderful example of the unique sound that the Marshals have created and honed over the last 10 years.

After All These Years is by turns a celebratory, cerebral, nostalgic, and just downright joyous collection. It acts as a retrospective, a potted history, a memoir of a decade of making music and as the perfect nod to what the future holds in store for this most resolute and hard-working of bands.

Kommentare deaktiviert für THE WYNNTOWN MARSHALS are celebrating their 10th anniversary with the retrospective After All These Years!