THE WYNNTOWN MARSHALS declare The End Of The Golden Age! 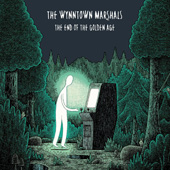 WYNNTOWN MARSHALS The End Of The Golden Age CD
€ 5,90

One of the freshest and most authentic bands on the current No Depression/Alt.Country Rock scene does not hail from Austin, Raleigh or Louisville but from … Edinburgh in Scotland. The Wynntown Marshals‚ brew of classic 70ies-style country rock, guitar rock with 80s pop elements and today’s interpretation of Americana sounds so genuinely American that one almost wants to see their passports to believe their origin. The End Of The Golden Age is the quintet’s brand-new fifth album – it ranges between the sounds of the Byrds, Flying Burrito Brothers and Poco to Son Volt, Jayhawks and Whiskeytown with references to the Stones, Neil Young, Wilco and Tom Petty.

In 2007 the Wynntown Marshals became the heirs of the Sundowns, one of Scotland’s most Americana-oriented folk-rock bands at the time. On their first, eponymous EP, released in early 2008, bandleader, songwriter, guitarist and lead singer Keith Benzie was crucial for the band’s sound with his songs between rock and melancholia and his raspy voice reminiscent of Sid Griffin, Jeff Tweedy and Ryan Adams. In May 2010 they released their debut album Westerner to tons of positive reviews in Maverick, Heaven, Americana UK, No Depression. With excellent guitarist Iain Sloan as a new member, the band further developed their guitar-based country rock. With their energetic live shows the Wynntown Marshals won over an avid fan base and a reputation as a terrific live band. After a number of changes in their rhythm section by 2012 the band had grown into a tight-knit quartet with band boss Benzie, guitarist Sloan as well as Murdock MacLeod (bass, backing vocals) and Kenny McCabe (drums, backing vocals). Produced and supported on numerous instruments by Andrew Taylor, their Blue Rose debut The Long Haul was a major step forward.

Why change a winning team? The band went into the studio again in the second half of 2014 with Andrew Taylor on the console and the same personnel plus new band member Richie Noble on keyboards to start work on their new album The End Of The Golden Age. With ten convincing tracks it is their most mature and organic, in short their best album to date.
Starting with the melodic rock of ‚There Was A Time‘ until the album-closing, hooky title track ,The End Of The Golden Age‘, the album delivers Marshals quality with all its well-loved ingredients: jangly 12-string Rickenbackers, intricately layered guitars, often erupting into twin solos, the rhythm section’s rolling Americana beat and the lovely interplay of Keith Benzie’s charismatically raspy lead vocals and the pristine three-part harmonies often reminiscent of the Eagles or CSN, the delicate pedal steel ornaments, the earthy organ or delicate piano fills, the natural analog sound of it all. ‚Dead Sunflowers‘ and ‚Better Than Yesterday‘, both stage-tested, are convincing, straight-ahead electric guitar rockers. ‚Being Lazy‘ is a Murdoch MacLeod number that finds its perfect incarnation as a lazy, semi-acoustic, slow motion ballad with pedal steel and Bruce Michie’s one-man brass section. Proof of the album’s significant country rock factor is provided by ‚Red Clay Hill‘ (with guest vocals by Hannah Elton-Wall from the Redlands Palomino Company), the bittersweet ‚Idaho‘ with its killer chorus, the plaintive, midtempo number ‚The Girl On The Hill‘ and the MacLeod-penned ‚Metagama‘. ‚Moby Doll‘ develops in over six minutes into a Wilco-like epic with guitar, organ and trumpet (Bruce Michie again) jam on a rousing finale.

With this strong outing the Wynntown Marshals have finally established themselves as a self-contained band with an original flavour in the Americana genre – easily on a par with their colleagues from the other side of the Atlantic. The End Of The Golden Age sets the bar for vital, handmade country & guitar rock in 2015 – all the band’s fans can look forward to their upcoming European tour and the live debuts of these strong new songs!