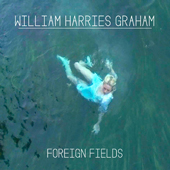 At not even 18 years old William Harries Graham is by far the youngest artist ever on Blue Rose Records. He is one of the young hopefuls and carriers of the torch on the vibrant Austin, TX scene where he mingles with the more experienced heroes who are not ready to turn it in just yet. On some level he is a veteran of the scene himself as the son of singer-songwriter, guitarist and „character“ Jon Dee Graham and community college teacher Gretchen Harries. After all he first got his hands on a guitar at age two, had his first live appearance at age seven and was the subject of a special benefit project – collecting money for treatment of a rare disease he was suffering from – shortly thereafter. William has battled Legg Perthes since he was 7 years old, started the Painted Redstarts at age 13 and honed his guitar-driven, passionate indie rock sound in countless live gigs up and down 6th Street and South Congress Avenue. Foreign Fields is the title of his strong studio debut – a successful start into a promising career.

Practically from the time he was born, William Harries Graham was a part of his father’s musical life, accompanying him on tours, meeting musicians and rock stars until anything else than a career in music seemed improbable. The rare children’s disease Legg-Perthes stunted the growth of his hip bones – and the medical costs were enormous. But the Austin community pulled together in the summer of 2005 with local top acts contributing to the Continental Club concert and the following CD/DVD release of Big Sweet Life which contained Jon Dee Graham’s songs covered by James McMurtry, Alejandro Escovedo, the Resentments, the Gourds, Patty Griffin, Ray Wylie Hubbard, Charlie Sexton, Kelly Willis, Bob Schneider and many more. Blue Rose had also started a campaign to collect money for William’s treatments which raised € 5,000.

William Harries Graham has become a quasi-spokesperson for his generation of musicians as the editor-writer of an Austin Chronicle column – he seems to become an integrating figure much like his father. His musical influences go far back into the 80s and 90s and are not – other than one might suspect – related to his father’s generations‘ songwriter/guitar/roots rock/TexAmericana sound. Foreign Fields sounds fresh and garage-y with mostly short, to the point songs. The youngster and his band, The Painted Redstarts, with their brash, edgy guitars, clearly defined riffs, hot rhythm tracks and reverb-laden vocals are reminiscent of Austin underground acts like Wild Seeds, Reivers, Dumptruck, Spoon and Arc Angels with more than a dash of Lou Reed/Velvet Underground, My Bloody Valentine or The Jesus & Mary Chain.

Next to band leader, singer and guitarist Graham, the Painted Redstarts are the rhythm section. Mark Addison recorded and produced Foreign Fields‚ eleven tracks. Addison has worked with artists like Ian Moore, Guy Forsyth, the Band Of Heathens, Jess Klein, Honeybrowne and more but he was particularly impressed with this young talent.

The opening title track is a brooding midtempo number with a hooky chorus. ‚Curtains Wide‘ is powerful electric rock with vague vocals and a killer riff. In ‚Lies‘, a minor-key atmosphere competes with melodic vocals. ‚Mystical Ways‘, a single with a high recognition factor, is beautifully deranged, rhythmically intricate, indie-guitar shoegazer material. The bittersweet ‚Puzzles“ was co-written with ex-band member Marlon Sexton (the son of Bob Dylan-sideman Charlie Sexton, also known for his solo work, the Arc Angels and as producer for Lucinda Williams). ‚Say Goodbye‘ has the same qualities as the third Velvet Underground album. ‚She’s Got‘, the album’s only cover song, brings the album full circle. It was written many years ago by Alejandro Escovedo for the True Believers, his band with Jon Dee Graham. Now he sings a duet vocal with Graham jr. on a piece of powerful Texan garage punk. The powerful, dynamic ‚London‘ features surprisingly mature poetry while ‚Watch Over Me‘ is an apt album closer with Daddy Graham’s wise, roadworn baritone vocal, atmospheric guitar parts, shimmering lap steel and sacred organ. Of course Jon Dee will watch over his son but he also knows that he will forge his own path.