Country Squire marks the second studio album from Childers, following his 2017 debut Purgatory. The new album was recorded at the Butcher Shoppe in Nashville, and features instrumentation from Stuart Duncan, Miles Miller, and Russ Pahl. Of the the new record, Childers said in a press release: “I hope that people in the area that I grew up in find something they can relate to. I hope that I’m doing my people justice and I hope that maybe someone from somewhere else can get a glimpse of the life of a Kentucky boy.” 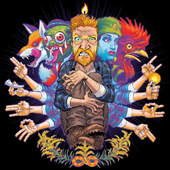