With St. Paul's Boulevard, Michael McDermott has finally created the masterpiece that so many people knew he had in him. The album is bold, broad shouldered, brave and beautiful. Where is St. Paul's Boulevard? McDermott said, "For me... everyone has their own St. Paul's Boulevard. Where we suffered heartbreak and lost our innocence. We learned about our shortcomings and searched to find our place in this world. Where we struggled to nurture love and light in a darkened world. Those days are now just a wash of dreams of characters of drunken and drug fueled nights wandering all over town looking for an angry fix driven by love, lust or some kind of connection." Backed by his incredible band and co-produced with his drummer Steven Gillis, McDermott also brought in some A-listers like Will Kimbrough, David Grissom, John Deaderick to fill out this "Wall Of Sound" album. 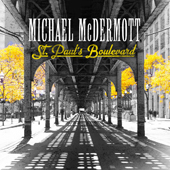