2018 release, the eighth studio album from the country music singer/songwriter. His long-awaited album Lifers marks his debut for Rounder, and is a creative leap forward for Jinks. The eleven original songs on the album tackle heady themes of faith ("Holy Water"); love, loss, and the desperate measures to which they sometimes drive people ("Must Be the Whiskey," "7th Floor," "Somewhere Between I Love You and I'm Leavin'," "Colorado"), loneliness, ("Desert Wind"), and the passage of time ("Stranger"). Lifers is the follow-up to his 2016 album I'm Not the Devil, which reached #4 on the Billboard's Country Albums chart. 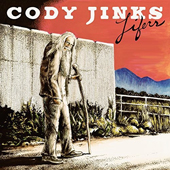