"It is Volumes 2 and 3 to follow on from Volume 1 which I released back in 2007. I wouldn’t say that it is a definitive collection but the tracks have been taken from fifteen of my studio albums. I have taken what I think are the best and I have also added another six songs that were outtakes from other sessions which I found whilst going through some of the old tapes. After listening to them I thought ‘why on earth didn’t I put this on an album’ (laughter). Some little thing that niggled you after the original recording session, one note that is flat, something was set at the wrong level, something bothered you about the track at the time and now later in your life you realise that those things that were bugging you at the time are not important. You are missing the wood for the trees." (David Knopfler) 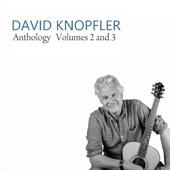