First Cigarette, a full-length album, follows Travis Meadows' 2013 EP Old Ghosts & Unfinished Business and his 2011 debut Killin’ Uncle Buzzy. The unflinching lyrical honesty and soulful rasp that made Meadows a cult figure with those early releases also abound on First Cigarette, which finds Meadows expanding his sonic palette and, somehow, digging even more deeply into his personal well of stories and lessons.
“We recorded [First Cigarette] close to three years ago now,” Meadows tells the Scene, speaking by phone as he prepares to hit the road for Mississippi. “It’s been really fulfilling, especially live, to see people responding like they are. It’s overwhelming. When I say ‘overwhelming,’ I mean comments like ‘You may have saved my life’ kind of stuff. What do you say to that? How do you answer that, you know?”
The fact that Meadows’ work receives such heartfelt responses isn’t surprising to anyone who’s heard it. The power of his songs has earned him cuts by artists like Eric Church and Dierks Bentley. His lyrics showcase his vulnerability in a way that few other songwriters could pull off, seasoned or otherwise, and what he isn’t able to say with words he nevertheless conveys with raw emotion.
First Cigarette’s opening track, “Sideways,” is the perfect distillation of Meadows’ gift, an affecting display of emotional intelligence and hard-earned wisdom with gospel-tinged vocal flourishes that recall Chris Stapleton. “Push it down, it comes back up,” Meadows repeats at the song’s bridge, and you can tell that mantra has been with him longer than the song itself has.
“ ‘Sideways,’ to me, was me kind of telling the world how vulnerable I am and how weak I am as a human being, pushing down emotion and letting it come out in other ways,” Meadows says. “Apparently, that’s a more common occurrence than maybe I realized, because a lot of people identified with that song. I thought it would be something a little more light, like ‘Pray for Jungleland’ [that audiences would connect with], but ‘Sideways’ has really grown wings. It’s been a delight.”
Putting his vulnerabilities on paper has not always been a delight for Meadows. Killin’ Uncle Buzzy came from a stint in rehab in which Meadows’ counselor suggested he try journaling. He wrote songs instead, initially doubting that the exercise would prove beneficial.
“I used to think psychology was bullshit, let me just say that,” he says. “I thought the idea of just telling somebody something, that it was kind of bullshit. But after having gone through it, there was something really powerful in talking to somebody and letting them have a path into your brain to help sort things out.”
These days, Meadows’ songs are all paths into his brain. Writing is how he makes sense of his world, and he hopes that doing so helps others to make sense of theirs, too. Even his singing has changed. Prior to Killin’ Uncle Buzzy, he screamed his lyrics, in what he thinks in hindsight was “a cry for attention.”
“I learned a long time ago that a lot of times, I don’t know how I feel about a certain subject until I write about it,” he says. “A lot of times when I’m tackling things, I start writing about it and kind of come to terms with how I feel about a certain circumstance. So this far into my life, it’s actually quite therapeutic and necessary.”
Speaking with Meadows now, he seems confident, content, almost Zen-like in his consideration of the difficult but necessary path that has led him to First Cigarette. The only problem — and he’ll be the first to admit it’s a good one to have — is that these days he isn’t feeling the emotional pain he used to.
“I don’t know where I’m gonna find content,” Meadows says with a slow chuckle. “I guess I’m just gonna have to write happy stuff.” 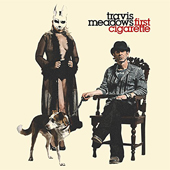