Best known as the lead guitarist of Jason Isbell and the 400 Unit since 2013, singer-songwriter Sadler Vaden has announced plans for his second solo album titled Anybody Out There? and self-produced by Vaden with the help of longtime collaborator and multi-platinum producer Paul Ebersold. Grammy-winner Richard Dodd mastered the 10-song set. “I really wanted to make a concise, strong-sounding rock ‘n’ roll album that wasn’t like a garage-y type of thing but wasn’t too polished,” Vaden told Billboard. “I wanted to take a little more of a deeper dive into my songwriting with this particular record, my awareness of what’s going on around me in the world as I see it…I’m going into my mid-30s. A lot of it just seeps in naturally, but with everything that’s going on in our culture and our society there were some things I felt like I wanted to say.” The lead offering from Vaden’s latest LP is “Next To You,” an uptempo road-warrior lament that finds the singer longing for past love. The album also features songwriting contributions from Aaron Lee Tasjan. 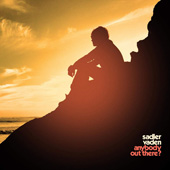